A Saturday afternoon in the life of a football reporter 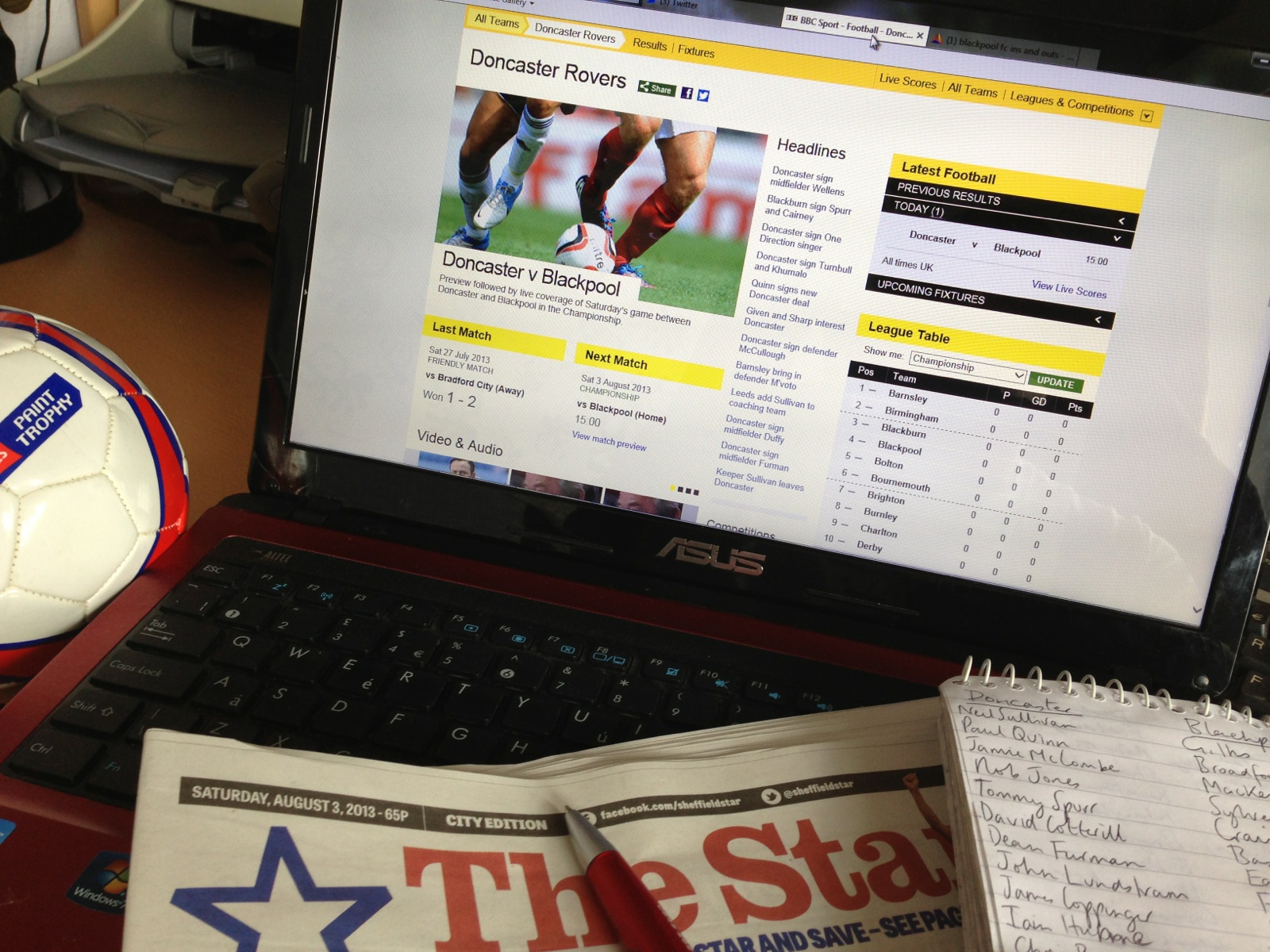 England’s cricketers were still hogging the back page headlines as they put the Aussies to the sword. The nation was basking in a rare heat wave and the warm glow of another summer of sporting success offered some comfort in tough economic times. For those in my trade the new football season was upon us and there was work to be done. It had come around more quickly than ever – the first weekend in August this time. Nobody seemed able to recall an earlier start to a new campaign.

My assignment for Final Score was newly-promoted Doncaster Rovers versus Blackpool. To cover any match as a reporter, preparation is the key. In fact, covering a game outside of the Premier League requires even more research. Every development in the top flight is reported in minute detail by the various media outlets, so that information is usually right in front of you. You have to look a bit harder to find out the latest on the Doncaster Rovers takeover or who Blackpool have signed in the close season. If you get the details wrong, supporters are rarely shy about telling you.

I usually know my fixtures four or five weeks ahead. Preparation for the next match begins the week before with Match of the Day and Match of the Day 2. As well as following the general cut and thrust of all of the Premier League fixtures, I pay special attention to the two sides I will be covering. During the following week, I take a similar approach by keeping across all football stories but jotting down rough notes for the game ahead and chatting to contacts. If either of the two teams are in action in midweek, I make a point of watching the games or at least the highlights to keep on top of their current form, injuries or other stories. I usually  present sports news bulletins and film an item for Football Focus during the week possibly with one of the teams I will be reporting on, so that clearly helps. By Friday, I look to put together the final match notes which I take with me to the ground. They will include line ups, details of most recent matches, top scorers, disciplinary record, referee and any other news.

Saturday dawns with a look at the sport on BBC News, Sky Sports News, the back pages, some websites and Twitter. Breakfast is taken on the hoof and then it’s time to hit the road with BBC Five Live for company all the way. I aim to arrive at the ground at 1pm. I plug in and test my broadcasting equipment in the press box or on the gantry then it’s time for lunch in the press room. This is a chance to catch up with colleagues and chat about any developing stories. Social media is becoming an increasingly important tool for reporters. Most are glued to Twitter looking for information from players, other reporters and fans or offering observations and news of their own. I was once at Everton when Louis Saha was surprisingly absent from the match day squad. A quick look at Twitter revealed him sounding off about the decision to drop him. We had an instant news story before a ball had been kicked. Social media has been brilliant for journalists in that respect. Managers probably have a slightly different opinion.

I  receive last minute instructions from the editor of Final Score, Steve Rudge and pick up the team sheet at about 2.15pm. It’s time to write a piece setting the scene for when the programme comes on air on the BBC HD Channel at 2.30pm. The aim is to provide the most significant team news and give the viewer a reason to be interested in that game. It may have a significant bearing on the title race, a top four position, relegation or a manager’s future. The bigger the game, the more often the reporter is called upon to update the viewers of Final Score. The programme reaches a climax when coverage switches to BBC One which guarantees a big audience especially in the winter months as the nation begins to sit down to enjoy a Saturday evening’s viewing.

As it turned out, there was little drama at the Keepmoat Stadium with Blackpool completing a fairly routine 3-1 victory although Doncaster Rovers played some good stuff for a spell. With little controversy, the post match interviews with the managers for that night’s Football League Show were straightforward too – Paul Ince was delighted, Paul Dickov slightly less so.

Other days will be more dramatic than this. Of that, you can be sure. I carry no torch for Manchester City but the climax to their title-winning season is unlikely to be matched for excitement. I was privileged to be there to witness it. After forty odds weeks of Premier League combat, for it to come down to the last kick of the last match to decide the destiny of the title was extraordinary. The race for honours looks more open this season than it has for quite a while. I am lucky to be able to report on every twist and turn between now and next May.