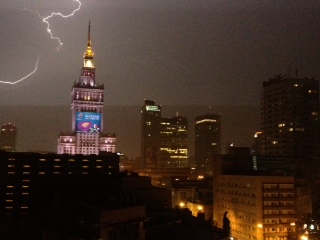 A violent, electrical storm in Warsaw shattered my plans for an early night and a solid eight hours sleep at the end of the group stages of Euro 2012. Many residents and visitors to the city were woken from their beds at around two thirty in the morning.

The storm had been predicted. Its ferocity had not. I stood at the window of my ninth floor hotel room for half an hour trying in vain to get a picture as the sky was illuminated by a dazzling light show. Unfortunately, every time I clicked I managed to miss the lightening bolt.

Match of the Day commentator Steve Wilson, in a room on the same side of the hotel, had the same idea. Steve had more luck, and skill, than me and below is his shot of lightning over Warsaw’s Palace of Culture.

So, Euro 2012 enters the knockout phase. The Republic of Ireland, who I have been covering, have already packed their bags and headed home chastened by the experience of playing their first international tournament in a decade. The Irish could not sustain their impressive run from qualification and pre tournament friendlies in which they had gone fourteen matches unbeaten.

However, their unbelievable travelling supporters – over 25-thousand of them – made an indelible impression upon the Championship. They packed the train from Gdansk to Poznan where they played their final game, a 2-nil defeat by Italy the other day. The train was so full that I had to perch on my luggage in the corridor. It’s not all glamour in TV, you know.

From here on, it’s knockout football. England are still in their fighting and surpassing many expectations. It’s Italy in the last eight and the dream of possibly meeting old foes Germany in the final in Kiev on July 1st. Let’s hope the England players have been practicing penalties.